Book Review: The Obsidian Pebble by Rhys A. Jones 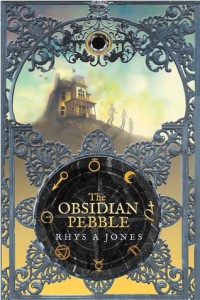 These days, anyone and everyone can get published–writing about things like werewolves and vampires, true love and broken hearts. Look at 50 Shades of Grey, a spin off of Twilight, or any of those Harlequin bodice rippers. However, there are also those authors who aren’t popular, yet take topics that never get old and cliche. Rhys A. Jones is one of those authors.

Jones’ young adult novel The Obsidian Pebble looks at a young boy named Oz and his life in a small town in England — Oz doesn’t have a father, and he and his friends discovered a secret about the house he and his mother live in.

This story, a short 257 pages, is very relatable to children and young adults, with the added adventure of mystery and suspense. Oz’s father died several years before this book takes place, and Oz and his friends discovered the secrets of the house during the novel. I enjoyed how Jones entwined the struggles Oz goes through living with one parent and missing the other, while spending time with two friends, playing sport and solving a mystery. The ability to weave several lines of plot together successfully is a gift Jones possesses.

While this is a young adult novel, I felt sometimes the characters were too old for the book. Oz is 11, but things he said throughout the book made it seem like he was older, more like 14 or 15. It is understandable, as dialogue can be tricky, making what people say seem real and natural. However, there were parts the dialogue felt forced and too old for the young characters.

However, despite the unnatural dialogue at times, everything that happened in the story flowed nicely. Things that happened felt natural, the actions characters take were in character and nothing felt as if it was just to steam the plot along.

I also applaud Jones’ use of imagery. While I haven’t read too many young adult or children’s novels in a long time, I imagine there are few that use much imagery. I am a sucker for it, I love reading the interesting descriptions and comparisons to descriptive things, and Jones succeeded in using those comprehensibly.

Overall, I enjoyed this book from start to finish. I appreciated the many different aspects Jones used throughout the book, and my attention was kept the entire time.

The Obsidian Pebble is the first in Jones’ Artefact series, and I hope to read the next novels in the series.

Very soon, a question and answer session with author Rhys A. Jones will be available to read on The Obsessed Reader. This session will focus on Jones’ writing process, where his ideas come from and other interesting things about the man behind The Obsidian Pebble. Keep an eye out!

Copyright © 2021 The Obsessed Reader. Theme by