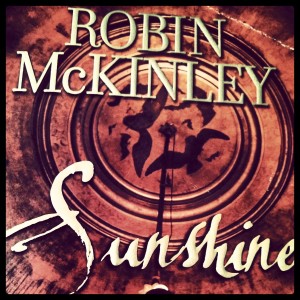 “I had no idea that blood and dessert could go together so well,” said Amber Benson. Benson was referring to Robin McKinley’s novel Sunshine.

Sunshine is my favorite book, ever. No lie. It’s not the best novel ever written, and I’ll be the first to say that, even after my previous statement. However, I love the uniqueness of the story, characters, plot, place and details. Especially details. I love details, and all the details in this novel I just melt over.

Sunshine is a baker in New Arcadia, a city in a dystopian world. She works at Charlie’s, a restaurant her step-father owns, and claims to be the only person, aside from her new assistant, that can withstand working in a bakery during 120 degree summers. She loves making up new recipes for the café, loves her boyfriend Mel and usually loves spending time with her family. Then, one night, she’s kidnapped by vampires and chained to a wall in a house with a vampire for three days.

Ultimately, Sunshine makes friends with Con, the vampire she’s chained up with. He’s an unusual vampire, but she discovers just how unusual she is, too. In broad daylight, when vampires should burst into flames and turn to ash, Sunshine touches Con and puts a magical screen in his skin that allows him to walk in the sunlight until they reach safety. And, since then, they share a bond neither can ignore.

McKinley’s novel was published in 2003, two years before Stephenie Meyer came out with her (so-called) hit Twilight. Sunshine contains magic, vampirism in its grittiest, chocolate and darkness. I’ve been fascinated by vampires since before high school, because I loved how they lived in the darkness and survived on others, the death seemed interesting, fantastical. And, somehow, I stumbled on McKinley’s novel by accident at Barnes and Noble one day, and ever since, I’m glad I did.

This novel helped push me to want to read more. It helped me want to write more. I learned about character development, as Sunshine learns about herself and Con, and their relationship in the grand scheme of things. I learned about plot when Sunshine must make certain decisions to help her new vampire friend evade the stake. I learned about how to style writing to fit the character, since Sunshine has a dry sense of humor and speaks her mind. I learned about fantasy and how to make the broad, sometimes clichéd genre work for your benefit by changing something so simple and overdone, like vampires, into something unusual and interesting, like adding an unwilling magic-handler and people devoted to removing anything inhuman from the world.

I imagine there are flaws, like with any novel. However, these flaws are so minuscule in my mind that they don’t really count. Not with me, anyway. I consider these flaws just slight weaknesses in the writing, but who doesn’t have some kind of weakness when they put themselves out there in an art form meant to be subjective and creative? I’m okay with any flaws I find, but that is personal preference.

If you find yourself in search of a good fantasy, or vampire, novel, search out Sunshine and give it a good shot. You’ll probably surprise yourself what you think of it in the end.

Barnes and Noble and Amazon have Sunshine available for purchase. If you find this novel enjoyable, the Newsflesh trilogy, Dracula, Twilight, I Am Legend or World War Z might be of interest.